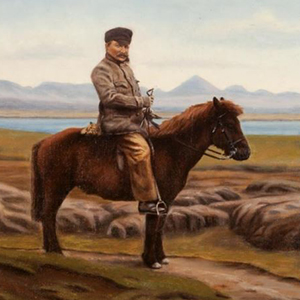 Pike Ward was an extraordinary Devonian who became a hugely important figure in the history of modern Iceland. His story had been forgotten until his diaries and photographs were discovered by Katherine Findlay in 2016. At this event, Katherine and radio producer and actor Jo Loosemore will give an insight into their project to dramatise Pike Ward’s remarkable life in audio. They will talk about his place in history and the creative process of bringing the past alive in sound, with some live readings to preview the production. The Custom House is the ideal setting for this event as Pike Ward worked in Iceland for many years on behalf of a company based on Exeter Quay.

This event will be live-streamed from Exeter Custom House. This is an opportunity to be part of a small, socially distanced live audience at the Custom House for this event, click ‘Book now’ to book your ticket. We will be following Government guidance to ensure the event is Covid-19 secure.

You can also ‘save a seat’ at the free live-stream here to watch from home.

Katherine Findlay is a writer, researcher and project manager specialising in the history of Devon and Iceland. Her research into the life of Pike Ward resulted in a book based on his diaries and a series of events and exhibitions in the UK and Iceland. These included a major exhibition in 2019 at the National Museum of Iceland. Her work to tell the story continues.

Radio maker. History finder. Theatre lover. Jo Loosemore is a broadcaster, curator and actor. For the BBC, she has created radio dramas, documentaries and live programmes. This has included World War One at Home (in partnership with the Imperial War Museums) for network and local radio, regional tv and online. From Brazil to the Battlefield, the story of Exeter fighting footballers was broadcast on BBC 5 Live, and a series of features appeared on BBC Radio 4 and 4Extra. She also produced the Listening Project’s national tour for BBC Radio 4, BBC Scotland, BBC Wales and BBC local radio in partnership with the British Library, contributing the 1000th conversation to the national collection. Having created Plymouth’s oral history archive, she is the curator of Mayflower 400: Legend and Legacy – the national commemorative exhibition for 2020/21  at The Box, Plymouth, and co-curator of Wampum: Stories from the Shells of Native America (UK tour) with the Wampanoag Nation. She has also been recently appointed Visiting Fellow at the University of Plymouth.

Pike Ward image: Pike Ward by Þórarinn Benedikt Þorláksson, c.1901. With thanks to the National Museum of Iceland.

reading from his latest collection Sonnets for Albert